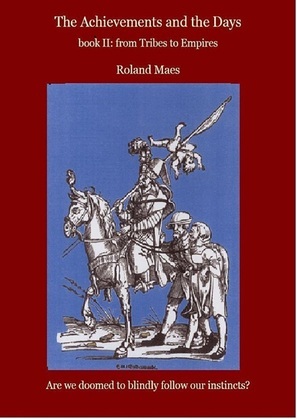 Book II. From Tribes to empires

We live in a world of violence, corruption and deceit. These violence and corruption are obvious throughout the world. Over the last few months, we have witnessed a global revolt against Western forms of government that represent 1% of the citizens, and these one percent do whatever is needed to keep their preeminence, at the risk of global destruction. Stupidity governs the management of human societies.

How can supposedly intelligent rational beings indulge in such a conduct?

Our intelligence derives from a bipedal locomotion, which favored the development of the brain.

The oldest known hominid is dated to 6-7 million years ago, with a brain the size of a chimpanzee’s.  The evolved H. erectus increased the size of his brains to 750 cubic centimeters. A second brain surge occurred 500,000 years ago and increased hominid brain size by another 75%, bringing it close to the 1300-1500 cubic centimeters of today. Homo sapiens emerged 100,000 years ago and is characterized by the ability to make tools, the ability to make fire, the ability to transfer information through an articulated language and the ability to think and to abstract. Equipped with these extraordinary new tools, he misused them and turned out to be ruthless, reckless and predatory.

Within an instant in evolutionary time, Homo sapiens replaced all hominins who lived at the same time and at the same place as H. sapiens. One thesis advances that the distinctive changes leading to the appearance of H. sapiens are largely the result of self-domestication caused by breeding patterns determined by cultural imperatives. It was human behavior itself that determined the most recent course in the development of the species.

No animal other than modern humans has any preferences in the selection of a mate according to youth, body appearance, facial features, skin tone or hair. In modern humans, these culturally determined factors are crucial in the preference of mating partners.  Female juvenile facial features are strongly preferred by males. Under the auspices of this process, predispositions for brain illnesses were protected from natural selection. The gracilization noted in female humans developed in males an instinct of dominance and aggression. The children endowed with the smallest intellectual quotient are the most aggressive because aggressiveness is a very primitive instinct controlled by the most primitive parts of the cerebral cortex. People dedicated to the accumulation of money, land or medals are generally simpletons whose intellectual development was arrested at the level of that of infants. Robust males, and especially those whose brain development was arrested at the level of 4-5 years, have exploited these features to subjugate, dominate and reduce their gracile female mates and their physically weaker companions to an inferior status. Empires ruled by terror and drenched in blood were created, in the Americas, in Europe and Asia.

The solving by the human species of problems not foreseen by primate evolutionary trends may appear desperately, embarrassingly and appallingly stupid. Primitive humanity constructed a Weltanschauung based on assertive creeds. Within Empires, this primitive Weltanschauung evolved into structured religions. In Eurasia, Christianity and Islam applied Logic to the creed. Under the evil guidance of Logic, the concepts elaborated by Islam and Christian integrists- who possessed the Truth and wanted its adoption by all- led to a denial of the value of life that has generated abhorrent, repulsive behaviors and immense sorrow on Humanity.

This book goes into the details of this evolution. You have to know the past to appreciate the present and confront the future.