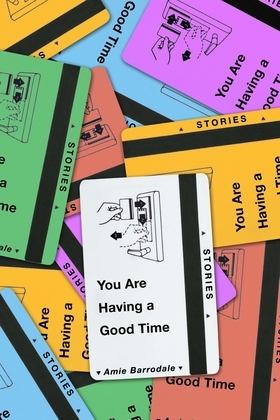 You Are Having a Good Time

Ema was in a bad situation with a married man. She was visiting him in Washington, D.C. His wife was out of town. He had gotten them an outrageously expensive hotel room, out of respect for his wife and their home. Ema took that as a sign of his decency, and as a sign of her doom.

So begins "The Real Sloane Newman," one of the stories in Amie Barrodale's debut collection, You Are Having a Good Time. In these highly compressed and charged tales, the veneer of normality is stripped from her characters' lives to reveal the seething and contradictory desires that fuel them. In "Animals," an up-and-coming starlet harbors a complicated attraction toward her abusive director. In "Frank Advice for Fat Women," an ethically compromised psychiatrist is drawn into the middle of a dysfunctional mother-daughter relationship. And in "The Imp," a supernatural possession ruins a man's relationship with his pregnant wife.

Barrodale's protagonists drink too much, say the wrong things, want the wrong people. They're hounded by longings (and sometimes ghosts) to the point where they are forced to confront the illusions they cling to. They're brought to life in stories that don't behave as you expect stories to behave. Barrodale's startlingly funny and original fictions get under your skin and make you reconsider the fragile compromises that underpin our daily lives.