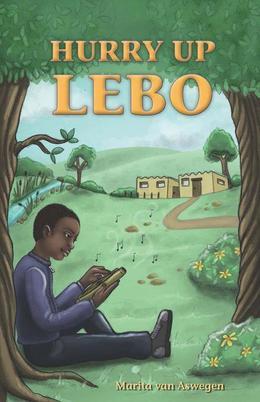 Written with sensitivity and imagination, Hurry up Lebo is a wonderful, morally enriching story that takes the reader on a journey of discovery through the eyes of a twelve-year-old township boy. Lebo doesn't go to school because he looks after his elderly, blind grandfather while his mother works. A daydreamer, Lebo has no friends, except for a spider to whom he talks. He loves stories, especially the ones his grandfather tells, and books, thanks to his aunt, who has taught him to read. He has a natural gift for music and dreams that one day he will make a mukimbe, a traditional xylophone and be able to play his own songs. He is also inventive, and builds a go-cart, hoping it will impress Pule, who is visiting her aunt next door. But his cousin, Dintwe, a dropout with few prospects, has other ideas. He is jealous of Lebo's good nature and his ability to create things. He tries to move in on Pule, steals the go-cart and generally goes out of his way to disrupt Lebo. Then Lebo's beloved grandfather dies. It seems like the end of his world, but gradually, with the help of the sympathetic adults in his life, Lebo finds his feet again. His musical talents bring him recognition, Pule lets him know she has no interest in Dintwe, and he is offered a place at school, thanks to a catch-up programme. We leave Lebo full of hope for the future and finally understanding the gift of music and storytelling bestowed on him by his grandfather.