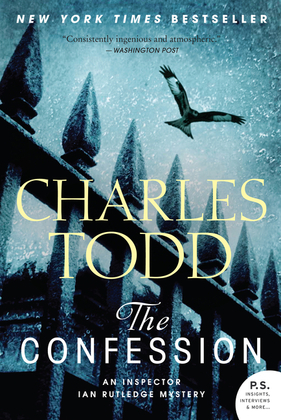 “One of the best historical series being written today.”
—Washington Post

“Todd once and for all establishes the shell-shocked Rutledge as the genre’s most complex and fascinating detective.”
—Entertainment Weekly

The Confession is historical crime fiction at its finest, continuing Charles Todd’s New York Times bestselling mystery series featuring severely damaged British World War I veteran, and yet still astonishingly efficient Scotland Yard inspector, Ian Rutledge. Todd’s troubled investigator wrestles with a startling and dangerous case that reaches far into the past when a false confession from a man who is not who he claims to be leads to a brutal murder. The Confession is a must-read for every fan of Elizabeth George, Martha Grimes, P.D. James, Ruth Rendell, and Jacqueline Winspear, as post-war London’s best detective finds himself ensnared in a dark and deadly investigation that unearths shocking small town secrets dating back more than a century.