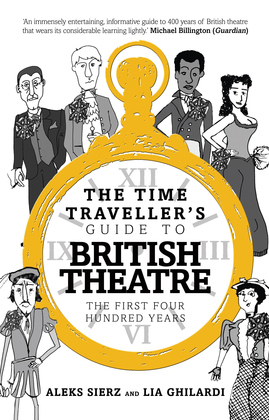 British theatre is booming. London's Theatreland is an economic powerhouse and British actors are the toast of Hollywood. But where did it all start and how did we get here?

To find out we time travel back four hundred years when there was not a single theatre in the land. This is where the story of British theatre starts, with the invention of new secular plays performed before large urban audiences. Beginning with the coronation of Queen Elizabeth I, Aleks Sierz and Lia Ghilardi trace the history of theatre from its lowly, lawless origins in London's notorious Bankside, to the Festival of Britain and the accession of Queen Elizabeth II.

Lively and based on extensive research, The Time Traveller's Guide to British Theatre explores our rich and living heritage, covering all the great names - from Shakespeare to Terence Rattigan, by way of Oscar Wilde and George Bernard Shaw - and the classic plays, many of which are revived today. It visits the venues and tells their dramatic stories. At every stage of this epic journey a fictional guide - each with their own idiosyncrasies and personal prejudices - introduces our intrepid travellers to the characters, controversies, gossip, stages and plays that made four centuries of headlines.