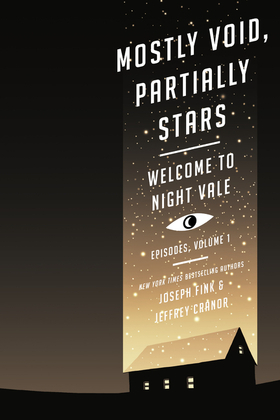 From the authors of the New York Times bestselling novel Welcome to Night Vale and the creators of the #1 international podcast of the same name, comes a collection of episodes from Season One of their hit podcast, featuring an introduction by the authors, behind-the-scenes commentary, and original illustrations.

In June of 2012, the creators of Welcome to Night Vale began airing twice-weekly podcasts. By the anniversary show a year later, the fanbase had exploded, vaulting the podcast into the #1 spot on iTunes. Since then, its popularity has grown by epic proportions, hitting more than 100 million downloads, and Night Vale has expanded to a successful live multi-cast international touring stage show and a New York Times bestselling novel. Now the first two seasons are available as books, offering an entertaining reading experience and a valuable reference guide to past episodes.

Mostly Void, Partially Stars introduces us to Night Vale, a town in the American Southwest where every conspiracy theory is true, and to the strange but friendly people who live there.

Mostly Void, Partially Stars is an absolute must-have whether you’re a fan of the podcast or discovering for the first time the wonderful world of Night Vale.