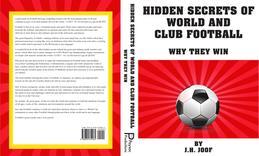 HIDDEN SECRETS OF WORLD AND CLUB FOOTBALL- Why They Win

The book is a first in its genre . It delves into football or soccer and looks at the various techniques and secrets which teams, players and countries have used over the years to be at the top of their game.

It is also a fan based book and focuses not just on the players and coaches views of how to excel in the great game but more importantly at what the fans see as enduring secrets and techniques which make for success  in the game . It also looks at the problems and issues facing football and its administration in particular especially FIFA, the world football governing body.  The book makes clear straight forward suggestions on solving these problems.

The book also suggests that for a game as big and universal as football it is not actually a very bad thing for some of the issues facing it to come up for attention  from football and non football quarters as these  issues have been rearing their heads for a long time. What is important for a game like football is that these problems are now being tackled  head on.  That will give the  wildly popular game a chance to exhale and to revamp and renew itself .Like the amoeba football will be rejuvenated.  It will be in a better position to adapt and adjust to the present and future environment which are different from the distant past  football grew up in.

That will make football strong, flexible and  sensitive to those who make it the great game it is, that is the fans, ordinary and statistical as they may be,  the players, the investors and other interested parties who do all they can to make football one of the greatest games of all time  and likely to remain so for a very long time to come. People love football.  Whatever can be done to prune it and those who run it  will earn  even more love and respect from them and win it new friends.  That must be a plus and  a good thing.  In  one important respect that is the light in which all the things going on around the world in respect of football should be seen in the long run not as ajn indictment of the game but a chance to renew and strengthen itself. Every big organization must go through that at some stage  in its existence.