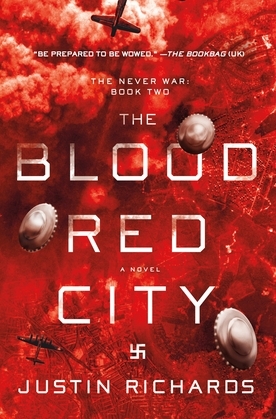 The alien Vril are waking, and the Never War is heating up. Colonel Brinkman and his team at Station Z desperately need answers - they have to discover exactly what they are facing and how the attack will come. But the information doesn't come easily. With a major Vril offensive imminent, the Nazis step up their own project to exploit Vril weapons and technology.

Leo Davenport finds himself fighting with the Greek resistance as he struggles to solve an ancient mystery. Major Guy Pentecross must travel to the ruined deathtrap of the most dangerous city in the world to track down the one man who can help.

From a spaceship crash in Bavaria in 1934 to the rat-infested devastation of Stalingrad, from the ancient ruins of occupied Greece to the bombed-out streets of London, the second book of the Never War series continues a secret history of the Second World War in which humanity itself is fighting for survival...

This is Indiana Jones crossed with The X-Files. In The Blood Red City, Justin Richards has an extremely credible grasp of the period's history and has transformed it into a groundbreaking alternate reality thriller.