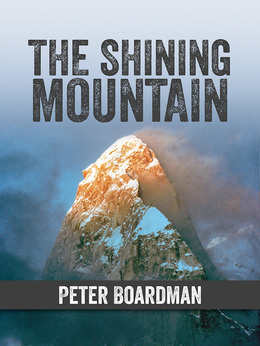 'It's a preposterous plan. Still, if you do get up it, I think it'll be the hardest thing that's been done in the Himalayas.' So spoke Chris Bonington when Peter Boardman and Joe Tasker presented him with their plan to tackle the unclimbed West Wall of Changabang - the Shining Mountain - in 1976. Bonington's was one of the more positive responses; most felt the climb impossibly hard, especially for a two-man, lightweight expedition. This was, after all, perhaps the most fearsome and technically challenging granite wall in the Garhwal Himalaya and an ascent - particularly one in a lightweight style - would be more significant than anything done on Everest at the time. The idea had been Joe Tasker's. He had photographed the sheer, shining, white granite sweep of Changabang's West Wall on a previous expedition and asked Pete to return with him the following year. Tasker contributes a second voice throughout Boardman's story, which starts with acclimatisation, sleeping in a Salford frozen food store, and progresses through three nights of hell, marooned in hammocks during a storm, to moments of exultation at the variety and intricacy of the superb, if punishingly difficult, climbing. It is a story of how climbing a mountain can become an all-consuming goal, of the tensions inevitable in forty days of isolation on a two-man expedition; as well as a record of the moment of joy upon reaching the summit ridge against all odds. First published in 1978, The Shining Mountain is Peter Boardman's first book. It is a very personal and honest story that is also amusing, lucidly descriptive, very exciting, and never anything but immensely readable. It was awarded the John Llewelyn Rhys Prize for literature in 1979, winning wide acclaim. His second book, Sacred Summits, was published shortly after his death in 1982. Peter Boardman and Joe Tasker died on Everest in 1982, whilst attempting a new and unclimbed line. Both men were superb mountaineers and talented writers. Their literary legacy lives on through the Boardman Tasker Prize for Mountain Literature, established by family and friends in 1983 and presented annually to the author or co-authors of an original work which has made an outstanding contribution to mountain literature. For more information about the Boardman Tasker Prize, visit: www.boardmantasker.com