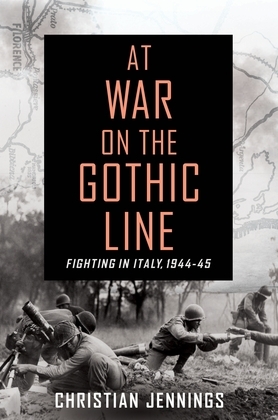 At War on the Gothic Line

In the autumn of 1944, as Patton?s army paraded through Paris, another Allied force was gathering in southern Italy. Spearheaded by over 100,000 American troops, this vast, international army was faced with a grim task?break The Gothic Line, a series of interconnected German fortifications that stretched across the mountains of northern Italy. Striving to reach Europe?s vulnerable underbelly before the Red Army, these Allied soldiers fought uphill against entrenched enemies in some of the final and most brutal battles of the Second World War.

In At War on the Gothic Line, veteran war correspondent and historian Christian Jennings provides an unprecedented look inside this unsung but highly significant campaign. Through the eyes of thirteen men and women from seven different countries, Jennings brings history to life as he vividly recounts the courageous acts of valor performed by these soldiers facing overwhelming odds, even as many experienced discrimination at the hands of their allies and superiors.

Witness the courage of a young Japanese-American officer willing to die for those under his command. Lie in wait with a troop of Canadian fur trappers turned snipers. Creep along mountain paths with Indian warriors as they assault fortified positions in the dead of night. Learn to fear a one-armed SS-Major guilty of some of the most atrocious war-crimes in the European theater. All these stories and more pack the pages of this faced-paced, action-heavy history, taking readers inside one of the most important, and least discussed, campaigns of World War Two.