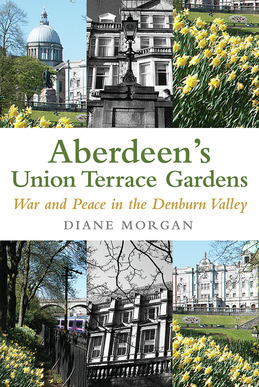 The complete, dramatic story of Union Terrace Gardens has never before been told in one volume. Now, in her eleventh book on Aberdeen, Diane Morgan presents the complete history of these iconic gardens on the west side of the Denburn Valley. From the early days as the Denburn Meadows, where sheep were corralled at the time of the nearby Woolmanhill sales, to the transformation of the meadows into the Great Bleachery which played a crucial role in Aberdeen's Industrial Revolution, this site has been central to the history and development of the city. And above the meadows rose the wooded Corbie Heugh - the crow cliff - where Johnnie Cope and his redcoats were encamped in 1745, prior to their disaster at Prestonpans. By the 1860s the area was in decline and being taken over by housing when the architect and future provost, James Matthews, overcame the faintheartedness and intransigence of his fellow councillors and, from the Heugh and the meadows below, created the Union Terrace Gardens we know today. Since then, Union Terrace Gardens has survived various attempts to raise and convert it, all of which have failed, including Sir Ian Wood's City Garden Project (2008-2012), which caused immense controversy in Aberdeen. This latest dramatic episode and the bitter and divisive struggle it created is described and reviewed in full. Along with an in-depth look at the handsome architecture of Union Terrace, and at the east side of the Denburn Valley, where the fate of Archibald Simpson's Triple Kirks has been sealed, Aberdeen's Union Terrace Gardens , with its authoritative text (including a crucial chapter from Mike Shepherd), and superb photography, is both a fascinating account of this important space and an indispensable addition to the written history of the city.