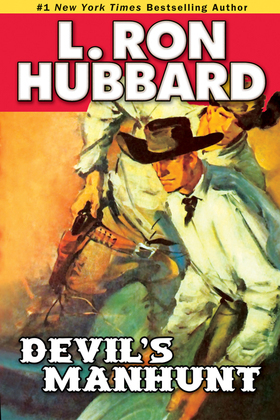 by L. Ron Hubbard (Author)
Buy for $4.99 Excerpt
Fiction Westerns
warning_amber
One or more licenses for this book have been acquired by your organisation details

In the Arizona territory, every mountain hides a fortune—and every man fends for himself.

Tim Beckdolt is as American as the frontier itself, as rangy and self-reliant as a young Jimmy Stewart. But after spending eight treacherous months digging $175,000 in gold out of Desperation Peak—all he has left is desperation. Two sadistic strangers have taken his gold, and now they want to take his life. He’s on the run—the target of a Devil’s Manhunt.

In a time and a place where the only law is the law of survival, Beckdolt will have to live by his wits…or die by the bullet.

In 1932, Hubbard led a mining crew on a six-month West Indies Mineralogical Expedition in Puerto Rico—the first complete survey of the island since it had become an American territory. It was an experience that informs this title with remarkable realism.

Also includes two additional Western tales: “Johnny, the Town Tamer,” the story of a local swindler who meets his match, and “Stranger in Town,” in which a drifter confronts a corrupt sheriff … and his own dark past.