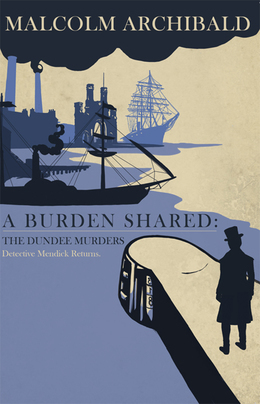 A Burden Shared: The Dundee Murders

The second book in the Mendick Mystery Series. Following "The Darkest Walk", when Sergeant Mendick is sent to Dundee to collect a prisoner, he expects a speedy return to London but instead an unfortunate turn of events see him retained to help solve a particularly gruesome murder. Within days Mendick finds himself leading the hunt for the mysterious China Jim who appears to control the criminal classes of Dundee through fear. Mendick's investigations take him from the curling rinks to the foul closes of the disregarded poor, and the bed of the enigmatic Johanna Lednock. More deaths follow and suspicion falls on a handful of men the elite of Dundee society, including Johanna's husband and Mr Gilbride, a local ship owner. Each murder involves apparent cannibalism, shocking even the war-hardened Mendick, who strives to find a connecting link. Dundee seems closed against him apart from the friendly Adam and Mrs Leslie, a prosperous couple who mourn the death of their seaman son. An attempt on Mendick's life convinces him he is nearing the truth, but only when a pawnbroker uncovers a watch stolen from one of the murdered men does Mendick begin to unravel the case.