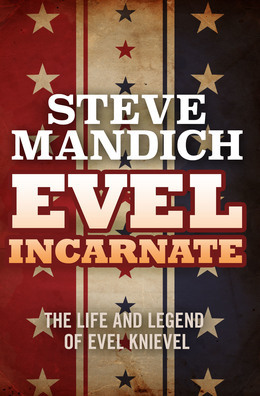 He was not a rock'n'roll star, cartoon character, religious figure, professional wrestler, writer, or politician. Nor was he famous for being an artist, comic book superhero, television personality, or movie star. He wasn't exactly an athlete either. Granted, he wore a few of these hats at various points throughout his career, but his fame primarily emanated from an obscure occupation which he made entirely his own.Arguably, no other figure in popular culture outside these realms had an impact which resulted in global notoriety, generated millions of dollars in merchandise, inspired widespread imitation, and yet was a constant source of controversy. He was a genuine celebrity, and at the height of his career, he was one of the most talked-about men in America.In Evel Incarnate, Steve Mandich vividly recounts the life and the legend of Evel Knievel -a relentless self-mythologizer, abetted by an international community of fans. They were hungry for a real-life super-hero, and waited with bated breath for the summit of his career: the much heralded, now infamous, Snake River Canyon jump.But the truth about this motorcycle daredevil is as fascinating, extraordinary and injury-laden as any of the legends he could promote. Incisive, witty and informed, Evel Incarnate is the Evel Knievel biography by which all others must be measured.