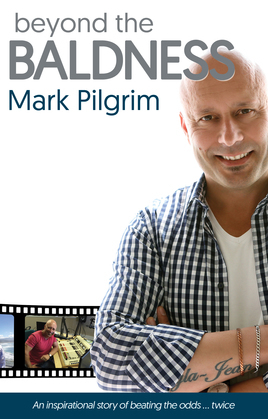 Mark Pilgrim had wanted to be on radio since he was thirteen years old, yet it always seemed like an unobtainable dream. It took a life-threatening illness to motivate him to pursue his passion. At the age of eighteen his radio dream was on the back burner. Mark had just completed the first year of a B.Com degree at university and had secured a bursary to complete his studies. Things were looking good. Then the blow fell: he was diagnosed with testicular cancer. After surgery and throughout months of chemotherapy his initial despair was transformed into determination. He found the inner strength to fight the illness, change his career direction, and to make his lifelong dream a reality. Beyond the Baldness is a personal account of Mark’s journey of determination, following every opportunity to audition for radio and television. From the humble beginnings of living in a trailer park, today Mark is one of South Africa’s best-known and most recognisable personalities, having deejayed on South Africa’s biggest radio stations and hosted some of the most memorable television shows like Big Brother and SA’s biggest ever game show The Power of 10. His voice is also used in countless radio and television commercials. As a motivational speaker, Mark spends a lot of his time engaging with delegates at conferences, chatting about his experience with cancer as well as the sudden heart attack he had at the age of 38. His positive approach to life is inspirational and it will encourage everyone who reads this book to chase their dreams!