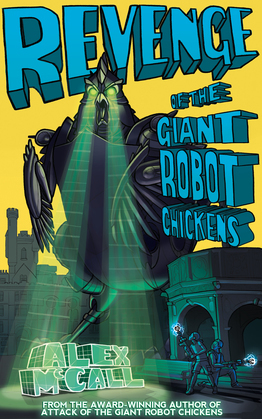 Revenge of the Giant Robot Chickens

Not too long ago the children of Aberdeen struck a blow against the tyranny of their oppressors -- an army of giant robot chickens. But the chickens were not defeated and now the city's warring factions have formed a council hoping to keep their chicken overlords at bay. But there's a new robot chicken on the block, the Chickenator! When the new chicken starts to target council members, pecking them up one by one, Rayna suspects fowl play. How are the chickens tracking council members down so precisely? Could there be a spy in the council? Meanwhile, Jesse tries to hatch a plan to crack the chickens and set the human captives, including his older brother, free. Who will have the last cluck? This is a spectacular sequel to the riotous pun-filled Attack of the Giant Robot Chickens, winner of a 2015 Scottish Children's Book Award.