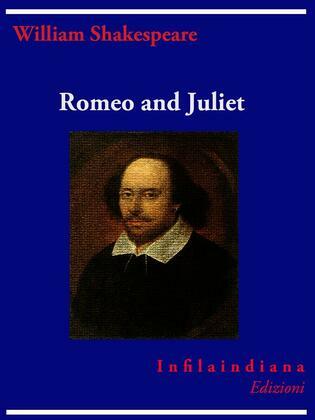 Romeo and Juliet is one of the most famous tragedies written by William Shakespeare.

Composed between 1594 and 1596, the play is about the impossible romance of two young lovers belonging to the feuding families of the Montagues and the Capulets, which have opposed each other for generations. Set in sixteenth-century Verona, Romeo and Juliet is the most ever celebrated and mentioned love drama. Numerous are the cinematographic, theatrical and musical adaptations of the story.

As tradition says, William Shakespeare was born the 23rd of April 1564 in Stratford-upon-Avon in Warwickshire.

He lived, therefore, in the England of Queen Elizabeth I, a crucial moment for English history, when the definitive transitioning from the Middle Ages to Modern era took place. Among his ample literary production 37 theatrical plays, 154 sonnets and several poems survived to this day. Shakespeare is the all-time great English author.

His plays include: King Lear and Macbeth (tragedies), Much Ado About Nothing (comedy) and Richard III (historical drama).