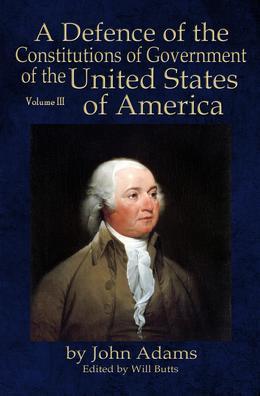 A Defence of the Constitutions of Government of the United States of America: Volume III

In this third and final volume of A Defence of the Constitutions of Government of the United States of America, John Adams brings to a close his lengthy argument against "collecting all authority into one center."

By first continuing his exposition of the Italian republics of the middle age, Adams acutely demonstrates the disharmony and upheaval that result from governments being improperly balanced. He then turns to theory, beginning with the letter of Padua and extending into a detailed refutation of the writings of Marchamont Nedham.

Against this backdrop of history and human experience, Adams is at his very best, pouring forth his timeless wisdom in defense of mixed and balanced governments and of the American constitutions.

"The best republics will be virtuous, and have been so; but we may hazard a conjecture, that the virtues have been the effect of the well-ordered constitution, rather than the cause."

"It is indeed a 'most excellent maxim, that the original and fountain of all just power and government is in the people;' and if ever this maxim was fully demonstrated and exemplified among men, it was in the late American Revolution, where thirteen governments were taken down from the foundation, and new ones elected wholly by the people, as an architect would pull down an old building and erect a new one."

Inspired by events in Europe and influencing events in America, Adams' extensive work is a partial history of man's eternal struggle to control power, and can serve for all time as a guidebook on the means to keep a people free.