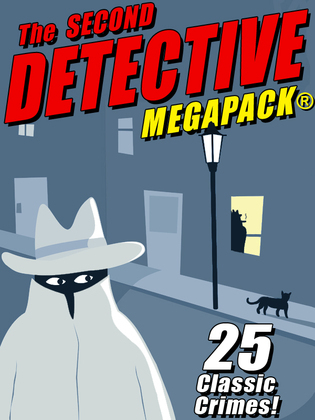 Welcome to our second volume of Detective stories! This is a grab-bag volume with contributions by many top mystery authors from the mid 20th Century pulp and digest magazines. There's something to appeal to every taste, from noir to crime to even holiday capers and a Christmas tale by Johnson McCulley (creator of Zorro). Included are:

DEAD MEN DON'T MOVE, by Thomas Thursday
ALIBI--WITH SOUND, by Robert Wallace
HOW? WHEN? WHO?, by Fletcher Flora
HELL'S SIPHON, by George Harmon Coxe
CONFLICT OF INTEREST, by James Holding
THE CAMPAIGN GRIFTER, by Arthur B. Reeve
THE PILLS OF LETHE, by Rufus King
CREPE FOR SUZETTE, by C. S. Montanye
THE BIG JOB, by Thomas B. Dewey
A BURNING CLUE, by E. Hoffmann Price
A LESSON IN RECIPROCITY, by Fletcher Flora
GUN-BLAST MEMORY, by Charles Marquis Warren
A LITTLE CLOUD...LIKE A MAN'S HAND, by Rufus King
THE SHANGHAI JESTER, by Robert Leslie Bellem
THE CONTAGIOUS KILLER, by Bryce Walton
CRIME'S CLIENT, by Guy Fleming
HIDE AWAY, by H.A. DeRosso
HELL IN A BASKET, by James Holding
DEATH FLIGHT, by Robert Wallace
THE PHANTOM AVENGER, by David M. Norman
THE KISS AND KILL MURDERS, by Stewart Sterling
THE NAMELESS MAN, by by Rodrigues Ottolengui
SANTA THUMBS A RIDE, by Johnston McCulley
GOOD NIGHT, DREAM BANDIT, by Emil Petaja
THE EBONY CAT, by Rex Whitechurch