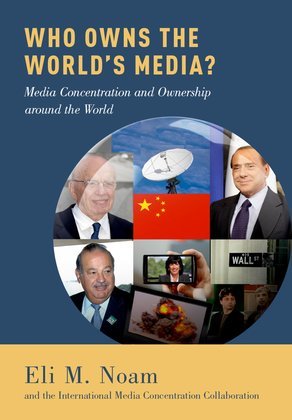 Who Owns the Worlds Media?: Media Concentration and Ownership around the World

Media ownership and concentration has major implications for politics, business, culture, regulation, and innovation. It is also a highly contentious subject of public debate in many countries around the world. In Italy, Silvio Berlusconis companies have dominated Italian politics. Televisa has been accused of taking cash for positive coverage of politicians in Mexico. Even in tiny Iceland, the regulation of media concentration led to that countrys first and only public referendum. Who Owns the Worlds Media? moves beyond the rhetoric of free media and free markets to provide a dispassionate and data-driven analysis of global media ownership trends and their drivers. Based on an extensive data collection effort from scholars around the world, the book covers thirteen media industries, including television, newspapers, book publishing, film, search engines, ISPs, wireless telecommunication and others, across a ten to twenty-five year period in thirty countries. In many countries--like Egypt, China, or Russia--little to no data exists and the publication of these chapters will become authoritative resources on the subject in those regions. After examining each country, Noam and his collaborators offer comparisons and analysis across industries, regions, and development levels. They also calculate overall national concentration trends beyond specific media industries, the market share of individual companies in the overall national media sector, and the size and trends of transnational companies in overall global media. This definitive global study of the extent and impact of media concentration will be an invaluable resource for communications, public policy, law, and business scholars in doing research and also for media, telecom, and IT companies and financial institutions in the private sector.