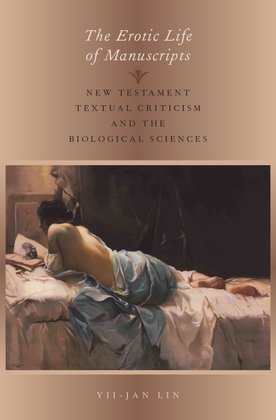 Since the New Testaments inception as written text, its manuscripts have been subject to all the dangers of history: scribal error, emendation, injury, and total destruction. The traditional goal of modern textual criticism has been to reconstruct an original text from surviving manuscripts, adjudicating among all the variant texts resulting from the slips, additions, and embellishments of scribal hand-copying. Because of the way manuscripts circulate and give rise to new copies, it can be said that they have an erotic life: they mate and breed, bear offspring, and generate families and descendants. New Testament textual critics of the eighteenth century who began to use this language to group texts into families and genealogies were not pioneering new approaches, but rather borrowing the metaphors and methods of natural scientists. Texts began to be classified into families, tribes, and nations, and later were racialized as African or Asian, with distinguishable textual physiognomies and textual complexions. The Erotic Life of Manuscripts explores this curious relationship between the field of New Testament textual criticism and the biological sciences, beginning with the eighteenth century and extending into the present. While these biological metaphors have been powerful tools for textual critics, they also produce problematic understandings of textual purity and agency, with the use of scientific discourse artificially separating the work of textual criticism from literary interpretation. Yii-Jan Lin shows how the use of biological classification, genealogy, evolutionary theory, and phylogenetics has shaped-and limited-the goals of New Testament textual criticism, the greatest of which is the establishment of an authoritative, original text. She concludes by proposing new metaphors for the field.