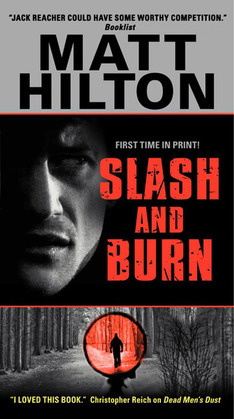 “Lee Child’s Jack Reacher could have some worthy competition.”
—Booklist

Fans of Lee Child, Jeffery Deaver, Robert Crais, John Sandford, and Michael Connelly have a new hero to root for: author Matt Hilton’s former military Special Forces operative-turned-problem solver, Joe Hunter. Slash and Burn is the third electrifying thriller in the Hunter series, as the emotional stakes are raised to the limit when he and his new lady love set out to find her missing sister and run head-first into a maniacal Texas millionaire sadist with shady allegiances, a serious bloodlust, and his own private army. Like Dead Men’s Dust and Judgment and Wrath, Hilton’s previous Joe Hunter page-turners, Slash and Burn provides action to the nth degree, and powerfully supports the contention of California’s Contra Costa Times that, “Hunter is one of the most exciting new tough guys to come along in years.”