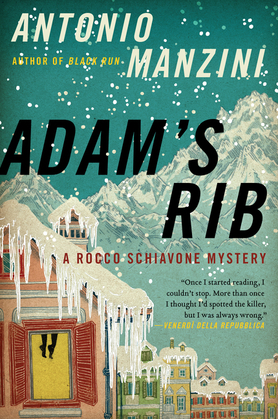 Six months after being exiled from his beloved Rome, Deputy Police Chief Rocco Schiavone has settled into a routine in the cold, quiet, chronically backward alpine town of Aosta: an espresso at home, breakfast in the piazza, and a morning joint in his office.

A little self-medication helps Rocco deal with the morons that almost exclusively comprise the local force. Especially on a day like today. It’s his girlfriend’s birthday (if you could call her that; in his mind, Rocco’s only faithful to his late wife), he has no gift—and he’s about to stumble upon a corpse.

It begins when a maid reports a burglary in Aosta. But there’s no sign of forced entry, and after Rocco picks the lock, he notices something off about the carefully ransacked rooms. That’s when he finds the body: a woman, the maid’s employer, left hanging after a grisly suicide. Or is it? Rocco’s intuition tells him the scene has been staged. In other words, it’s murder—a pain in the ass of the highest order.

In this stylish international mystery, Antonio Manzini further establishes Rocco Schiavone as one of the most acerbic, complicated, and entertaining antiheroes crime fiction has seen in years.