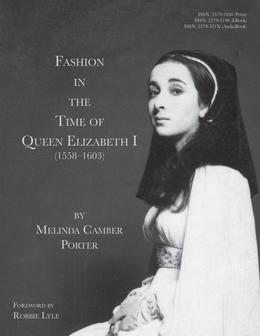 Fashion in the Time of Queen Elizabeth I (1558-1603) was a hand written thirty-four page document on eight inch by twelve inch lined British school tablet paper with thirty-one separate drawings on white paper by Melinda Camber Porter. Each drawing was cut out and glued into document. The seventeen page document on two sides was bound by pink yarn tied through two holes on the left side as the binding. Melinda Camber Porter wrote and illustrated this book as a school report in Second Grade (Class 2), where she attended The City of London School for Girls. Her teacher (unnamed) gave her a grade of A and commented, ‘Where did you find such descriptive material.’ We will never know, but Melinda’s reference material appears to originate from the great British fashion writer and illustrator of the 1930s, Dion Clayton Calthrop, who wrote and illustrate many books on English fashion from 1050 A.D. to 1750 A.D. This publication, Fashion in the Time of Queen Elizabeth I (1558-1603) is typed from the original hand written text and includes reproductions of Melinda Camber Porter’s original drawings. The book encourages young women and men to sketch and write about their favorite fashions and inspirations. The book also serves as a piece of history for The City of London School for Girls, and includes photos and awards of Melinda Camber Porter in the appendices. The City of London School for Girls has moved twice since the early 1960s as many records from Melinda’s time at the school (1958-1971) are no longer available. Mr. Robbie Lyle, who had known Melinda Camber Porter since their Oxford University days, provides background in the Foreward on the clothing in the time of Queen Elizabeth I and memories of Melinda Camber Porter.