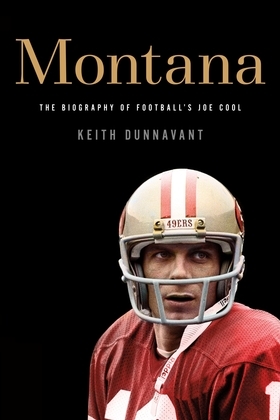 As long as football is played, Joe Montana will be synonymous with the heart-pounding rally. Seemingly impervious to the pressure of a scoreboard deficit, the quarterback known as Joe Cool brought a steadying calm to every huddle, especially when the situation seemed especially dire. His reputation for miracles began to take root at the University of Notre Dame. In the 1979 Cotton Bowl, he overcame the flu, hypothermia and a 22-point deficit to lead the Fighting Irish to a stunning victory over Houston. This narrative continued in the NFL, as he engineered 31 fourth-quarter comebacks, including victories known in professional football lore as The Catch and The Drive, forever casting his career in a heroic glow.

In MONTANA, acclaimed author Keith Dunnavant sketches the definitive portrait of a man who repeatedly defied the odds, on and off the field.

While leading the San Francisco 49ers to four Super Bowl championships over a nine-year period, establishing a new standard for passing efficiency, and twice earning the league's Most Valuable Player award, Montana became the signature quarterback of the 1980s and one of the greatest ever to play the game. Overcoming his own limitations, which caused him to be underrated coming out of Notre Dame, he quickly mastered Bill Walsh's West Coast Offense, and thereby, helped reinvent offensive football.

But it was rarely easy. Like the rallies he so often produced, his life was filled with the sort of tension that made his journey seem routinely dramatic: The father who pushed him. The high school coach who challenged his commitment. The college coach who very nearly squandered him. The back surgery that almost ended his career. The younger athlete who tried to take his job.

Rich an anecdotal detail, insight and context, MONTANA is a powerful story about a man who was defined by his intense competitiveness, and how this intangibly helped him become one of the ionic figures in football history.