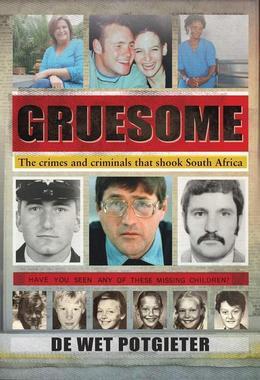 Gruesome: The crimes and criminals that shook South Africa

In this book, investigative journalist De Wet Potgieter follows the trail of a number of criminals in South Africa's history. These violent crimes, perpetrated from the late 1980s into the new millennium, vary from fanatical far-rightists who killed their innocent countrymen, to assassins who executed high-profile, state-sanctioned murders. He takes the reader behind the scenes of some of the most controversial events in our country and, with his fearless style of writing, pulls you right into the belly of the beast. In Gruesome, he shares information that has never before been made public. What really happened on the night of 17 June 1992 in Boipatong? What motivated the horrific attack on Alison Botha? What caused the ostensibly conformist policeman André Stander to become an unscrupulous bank robber? Who was the first person to see the connection between Gert van Rooyen's victims and a probable human-trafficking network? Potgieter relates how, as a journalist, he went about reporting on each of these interesting, gruesome cases. This book takes you back to the bloody newspaper headlines of yesterday.