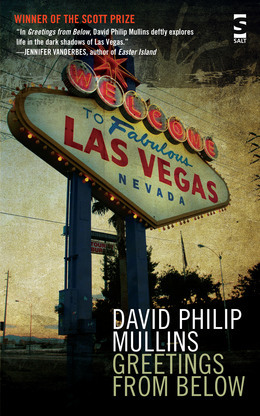 Greetings from Below, a collection of linked short stories, chronicles the life of Nick Danze, a young copy editor who suffers from several 'fixations' he believes are associated with some kind of sexual addiction. By day, Nick works for a weekly trade magazine called Footwear Today, while at night he frequents the various striptease bars, massage parlors, and swing clubs of Las Vegas and San Francisco, the two cities in which he lives throughout the book. Most of the stories are set in Las Vegas, where Nick was raised and where his widowed mother still resides, her emotional constitution slowly unraveling as she mourns Nick's recently deceased father and struggles with addictions of her own: to shopping, gambling, and pure cane sugar. The stories set in San Francisco deal mainly with Nick's longtime relationship with his girlfriend, Annie, whom he loves but with whom he isn't in love. Ultimately, through a series of episodes that spans more than twenty-five years, Nick's life is changed forever when he is forced to confront not just his own predicaments, but his mother's as well.