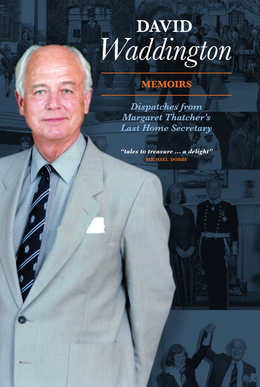 <div>As a lynchpin of Margaret Thatcher&#8217;s final Cabinet, David Waddington was at the heart of British politics at the passing of arguably the most defining government of the twentieth century. His memoirs are a testament to many years of loyal service to the Conservative Party, first as a determined constituency MP, then as a cajoling and shrewd Chief Whip, Home Secretary during the turbulent Strangeways prison riots, and finally as Leader of the Lords. These memoirs describe Lord Waddington&#8217;s varied life: from his adventurous childhood in Lancashire to an eventful stint in the army, including memorable postings to Hong Kong and Singapore, and a highly acclaimed career as a Queen&#8217;s Counsel &#150; not to mention his time as Governor of Bermuda. Decoration, renown and public praise colour Lord Waddington&#8217;s life, but it is his humility and wry Lancastrian take on the world that impress most: a potent mix of intelligence, duty and a sense of humour courses through every page. In his Memoirs, David Waddington allows us to glimpse a period of huge importance in British political history while also making clear the roots and principles that propelled him so far. </div>