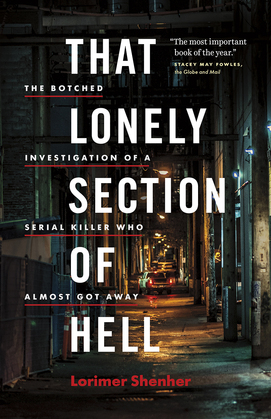 That Lonely Section of Hell: The Botched Investigation of a Serial Killer Who Almost Got Away

by Lori Shenher (Author)
Nonfiction News and investigations True crime Human science Psychology Psychopathology Post-Traumatic Stress Disorder (PTSD) Biography & autobiography
From her first assignment in 1998 to explore an increase in the number of missing women to the harrowing 2002 interrogation of convicted serial killer Robert Pickton, Lori Shenher tells a story of massive police failure—failure of the police to use the information about Pickton available to them, failure to understand the dark world of drug addiction and sex work, and failure to save more women from their killer.

Shenher explains how police unwillingness to believe the women were missing or murdered, jurisdictional squabbles, and a fear of tunnel vision conspired to leave women unprotected and vulnerable to a serial killer nearly three years after she first received a tip that Pickton could be responsible. She unflinchingly reveals her own pain and psychological distress as a result of these events, which left her unable to work with or trust the police and the criminal justice system. That Lonely Section of Hell reveals the deeper truths behind the causes of this tragedy and the myriad ways the system—and society—failed to protect vulnerable people.