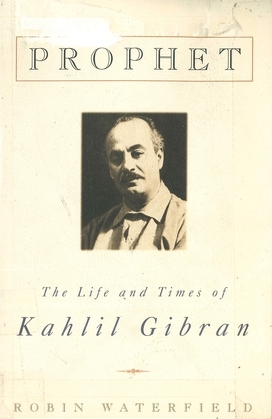 Born in the mountains of northern Lebanon, Kahlil Girbran (1883-1931) - mystic, society philosopher, author of one of the most enduring works of the 20th century, The Prophet - immigrated to the United States in 1895. A gifted artist, who specialized in painting for some years before he turned to writing, Gibran - although initially spurned by those whose approval he sought - was in time beloved by a number of prominent avant-gardists and hobnobbed with the rich anbd famous of Henry James's turn-of-the-century Boston. He then set his sights on the bohemian world of Greenwich Village in its early heyday before World War I.Gibran is known for the peace and optimism that permeates his work. Paradoxically, however, his life was littered with personal tragedies, conflicted sexuality, and deep heartache. Robin Waterfield skillfully traces Gibran's development from wounded Romantic and angry young man to his final metamorphosis as the Prophet of New York and shows what influences- psychological, social, and literary - led to these various phases. In fact, the road to the extraordinary success of The Prophet was not smooth or peaceful and tragically, Gibran himself di not live to see the phenomenal sales the book subsequently achieved. A complete reappraisal of all the remaining primary sources on Gibran's life and character, PROPHET is a brilliant work that reveals this Svengali-like guru of the New Age as a deeply unhappy, even tortured man.