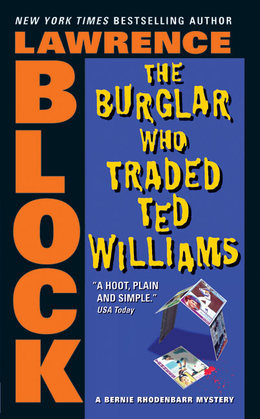 The Burglar Who Traded Ted Williams

Bernie Rhodenbarr is actually trying to earn an honest living. It's been an entire year since he's entered anyone's abode illegally to help himself to their valuables. But now an unscrupulous landlord's threat to increase Bernie's rent by 1,000% is driving the bookseller and reformed burglar back to a life of crime -- though, in all fairness, it's a very short trip. And when the cops wrongly accuse him of stealing a priceless collection of baseball cards, Bernie's stuck with a worthless alibi since he was busy burgling a different apartment at the time . . . one that happened to contain a dead body locked inside a bathroom.

So Bernie has a dilemma. He can trade a burglary charge for a murder rap. Or he can shuffle all the cards himself and try to find the joker in the deck -- someone, perhaps, who believes that homicide is the real Great American Pastime.