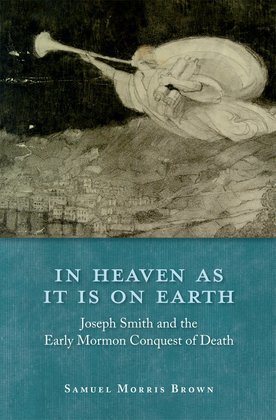 In Heaven as It Is on Earth: Joseph Smith and the Early Mormon Conquest of Death

A compelling new interpretation of early Mormonism, Samuel Browns In Heaven as It Is On Earth views this religion through the lens of founder Joseph Smiths profound preoccupation with the specter of death. Revisiting historical documents and scripture from this novel perspective, Brown offers new insight into the origin and meaning of some of Mormonisms earliest beliefs and practices. The world of early Mormonism was besieged by death--infant mortality, violence, and disease were rampant. A prolonged battle with typhoid fever, punctuated by painful surgeries including a threatened leg amputation, and the sudden loss of his beloved brother Alvin cast a long shadow over Smiths own life. Smith embraced and was deeply influenced by the culture of holy dying--with its emphasis on deathbed salvation, melodramatic bereavement, and belief in the Providential nature of untimely death--that sought to cope with the widespread mortality of the period. Seen in this light, Smiths treasure quest, search for Native origins, distinctive approach to scripture, and belief in a post-mortal community all acquire new meaning, as do early Mormonisms Masonic-sounding temple rites and novel family system. Taken together, the varied themes of early Mormonism can be interpreted as a campaign to extinguish death forever. By focusing on Mormon conceptions of death, Brown recasts the story of first-generation Mormonism, showing a religious movement and its founder at once vibrant and fragile, intrepid and unsettled, human and otherworldly. A lively narrative history, In Heaven as It Is on Earth illuminates not only the foundational beliefs of early Mormonism but also the larger issues of family and death in American religious history.