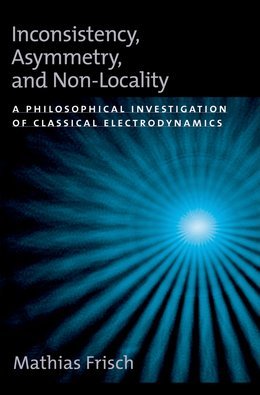 Inconsistency, Asymmetry, and Non-Locality: A Philosophical Investigation of Classical Electrodynamics

Mathias Frisch provides the first sustained philosophical discussion of conceptual problems in classical particle-field theories. Part of the book focuses on the problem of a satisfactory equation of motion for charged particles interacting with electromagnetic fields. As Frisch shows, the standard equation of motion results in a mathematically inconsistent theory, yet there is no fully consistent and conceptually unproblematic alternative theory. Frisch describes in detail how the search for a fundamental equation of motion is partly driven by pragmatic considerations (like simplicity and mathematical tractability) that can override the aim for full consistency. The book also offers a comprehensive review and criticism of both the physical and philosophical literature on the temporal asymmetry exhibited by electromagnetic radiation fields, including Einsteins discussion of the asymmetry and Wheeler and Feynmans influential absorber theory of radiation. Frisch argues that attempts to derive the asymmetry from thermodynamic or cosmological considerations fail and proposes that we should understand the asymmetry as due to a fundamental causal constraint. The books overarching philosophical thesis is that standard philosophical accounts that strictly identify scientific theories with a mathematical formalism and a mapping function specifying the theorys ontology are inadequate, since they permit neither inconsistent yet genuinely successful theories nor thick causal notions to be part of fundamental physics.