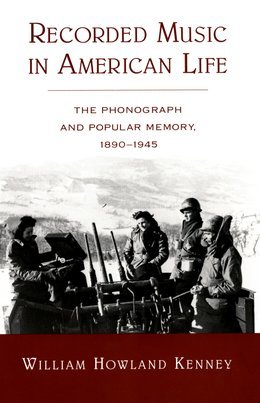 Recorded Music in American Life: The Phonograph and Popular Memory, 1890-1945

Have records, compact discs, and other sound reproduction equipment merely provided American listeners with pleasant diversions, or have more important historical and cultural influences flowed through them? Do recording machines simply capture whats already out there, or is the music somehow transformed in the dual process of documentation and dissemination? How would our lives be different without these machines? Such are the questions that arise when we stop taking for granted the phenomenon of recorded music and the phonograph itself. Now comes an in-depth cultural history of the phonograph in the United States from 1890 to 1945. William Howland Kenney offers a full account of what he calls the 78 r.p.m. era--from the formative early decades in which the giants of the record industry reigned supreme in the absence of radio, to the postwar proliferation of independent labels, disk jockeys, and changes in popular taste and opinion. By examining the interplay between recorded music and the key social, political, and economic forces in America during the phonographs rise and fall as the dominant medium of popular recorded sound, he addresses such vital issues as the place of multiculturalism in the phonographs history, the roles of women as record-player listeners and performers, the belated commercial legitimacy of rhythm-and-blues recordings, the hit record phenomenon in the wake of the Great Depression, the origins of the rock-and-roll revolution, and the shifting place of popular recorded music in Americas personal and cultural memories. Throughout the book, Kenney argues that the phonograph and the recording industry served neither to impose a preference for high culture nor a degraded popular taste, but rather expressed a diverse set of sensibilities in which various sorts of people found a new kind of pleasure. To this end, Recorded Music in American Life effectively illustrates how recorded music provided the focus for active recorded sound cultures, in which listeners shared what they heard, and expressed crucial dimensions of their private lives, by way of their involvement with records and record-players. Students and scholars of American music, culture, commerce, and history--as well as fans and collectors interested in this phase of our rich artistic past--will find a great deal of thorough research and fresh scholarship to enjoy in these pages.