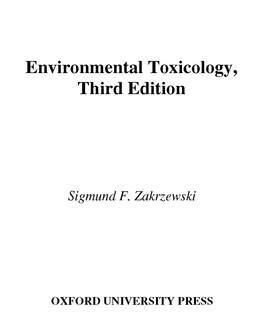 The fundamental principles of environmental toxicology are clearly presented here for university students and professionals in related fields. This book consists of two parts. In the first part basic metabolic, physiological, and pharmacological concepts are used to explain the fate of toxic chemicals in the body, with emphasis on carcinogenesis and mutagenesis. This part also contains a chapter on chemicals disrupting the endocrine system and a chapter on risk assessment and the precautionary principle. The second section deals with specific environmental problems - air pollution, alteration of the earths atmosphere, water and land pollution, including sections on wetlands, organic agriculture and genetically modified crops. It also deals with health and environmental effects of ionized radiation, and the effect of a rapid population growth on the environmental and human welfare. Chapter on pollution control and regulatory policies are also included.