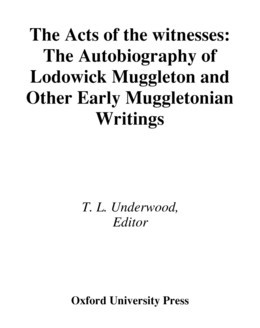 The Acts of the Witnesses: The Autobiography of Lodowick Muggleton and Other Early Muggletonian Writings

This book presents writings produced by the Muggletonians---an unusual seventeenth-century English sect founded in 1652 by John Reeve and Lodowick Muggleton. The volume draws on documents from a recently discovered Muggleton archive and rare seventeenth-century tracts. Among those included are Muggletons autobiography, excerpts from works co-written by Muggleton and Reeve, letters, songs (including ones composed to celebrate Muggletons release from prison), and miscellany.