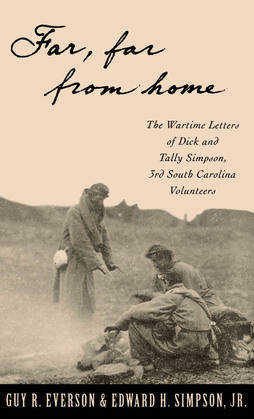 In April 1861, Dick and Tally Simpson, sons of South Carolina Congressman Richard F. Simpson, enlisted in Company A of the Third South Carolina Volunteers of the Confederate army. Their letters home--published here for the first time--read like a historical novel, complete with plot, romance, character, suspense, and tragedy. In their last year of college when the war broke out, Dick and Tally were hastily handed their diplomas so they could volunteer for military duty. Dick was twenty; Tally was twenty-two. Well educated, intelligent, and thoughtful young men, Dick and Tally cared deeply for their country, their family, and their comrades-in-arms and wrote frequently to their loved ones in Pendleton, South Carolina, offering firsthand accounts of dramatic events from the battle of First Manassas in July 1861 to the battle of Chickamauga in September 1863. Their letters provide a picture of war as it was actually experienced at the time, not as it was remembered some twenty or thirty years later. It is a picture that neither glorifies war nor condemns it, but simply tells it like it is. Written to a number of different people, the boys letters home dealt with a number of different subjects. Letters to Pa went into great detail about military matters in Lees Army of Northern Virginia--troop movements, casualties, and how well particular units had fought; letters to Ma and sisters Anna and Mary were about camp life and family friends in the army and usually included requests for much-needed food and clothing; letters to Aunt Caroline and her daughter Carrie usually concerned affairs of the heart, for Aunt Caroline continued to be Dick and Tallys trusted confidante, even when they were far, far from home. The value of these letters lies not so much in the detailed information they provide as in the overall picture they convey--a picture of how one Southern family, for better or for worse, at home and at the front--coped with the experience of war. These are not wartime reminiscences, but wartime letters, written from the camp, the battlefield, the hospital bed, the picket line--wherever the boys happened to be when they found time to write home. It is a poignant picture of war as it was actually experienced in the South as the Civil War unfolded.