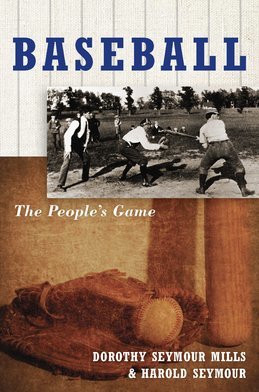 In Baseball: The Peoples Game, Dorothy Seymour Mills and Harold Seymour produce an authoritative, multi-volume chronicle of Americas national pastime. The first two volumes of this study -The Early Years and The Golden Age -won universal acclaim. The New York Times wrote that they will grip every American who has invested part of his youth and dreams in the sport, while The Boston Globe called them irresistible. Now, in The Peoples Game, the authors offer the first book devoted entirely to the history of the game outside of the professional leagues, revealing how, from its early beginnings up to World War II, baseball truly became the great American pastime. They explore the bond between baseball and boys through the decades, the games place in institutions from colleges to prisons to the armed forces, the rise of womens baseball that coincided with nineteenth century feminism, and the struggles of black players and clubs from the later years of slavery up to the Second World War. Whether discussing the birth of softball or the origins of the seventh inning stretch, the Seymours enrich their extensive research with fascinating details and entertaining anecdotes as well as a wealth of baseball experience. The Peoples Game brings to life the central role of baseball for generations of Americans. Note: On August 2, 2010, Oxford University Press made public that it would credit Dorothy Seymour Mills as co-author of the three baseball histories previously authored solely by her late husband, Harold Seymour. The Seymours collaborated on Baseball: The Early Years (1960), Baseball: The Golden Age (1971) and Baseball: The Peoples Game (1991).