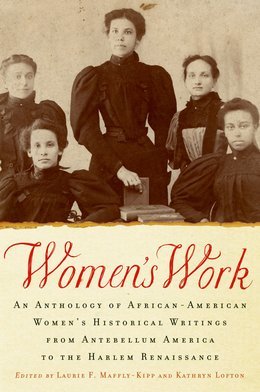 Womens Work: An Anthology of African-American Womens Historical Writings from Antebellum America to the Harlem Renaissance

Whether in schoolrooms or kitchens, state houses or church pulpits, women have always been historians. Although few participated in the academic study of history until the mid-twentieth century, women labored as teachers of history and historical interpreters. Within African-American communities, women began to write histories in the years after the American Revolution. Distributed through churches, seminaries, public schools, and auxiliary societies, their stories of the past translated ancient Africa, religion, slavery, and ongoing American social reform as historical subjects to popular audiences North and South. This book surveys the creative ways in which African-American women harnessed the power of print to share their historical revisions with a broader public. Their speeches, textbooks, poems, and polemics did more than just recount the past. They also protested their present status in the United States through their reclamation of that past. Bringing together work by more familiar writers in black America-such as Maria Stewart, Francis E. W. Harper, and Anna Julia Cooper-as well as lesser-known mothers and teachers who educated their families and their communities, this documentary collection gathers a variety of primary texts from the antebellum era to the Harlem Renaissance, some of which have never been anthologized. Together with a substantial introduction to black womens historical writings, this volume presents a unique perspective on the past and imagined future of the race in the United States.