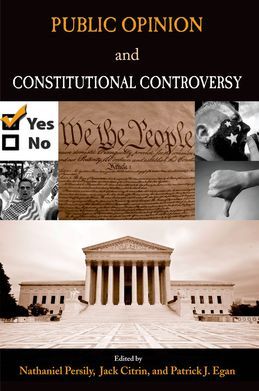 American politics is most notably characterized by the heated debates on constitutional interpretation at the core of its ever-raging culture wars, and the coverage of these lingering disputes are often inundated with public-opinion polls. Yet for all their prominence in contemporary society, there has never been an all-inclusive, systematic study of public opinion and how it impacts the courts and electoral politics. Public Opinion and Constitutional Controversy is the first book to provide a comprehensive analysis of American public opinion on the key constitutional controversies of the twentieth century, including desegregation, school prayer, abortion, the death penalty, affirmative action, gay rights, assisted suicide, and national security, to name just a few. With essays focusing on each issue in-depth, Nathaniel Persily, Jack Citrin, Patrick Egan, and an established group of scholars utilize cutting edge public-opinion data to illustrate these contemporary debates, methodically examining each one and how public attitudes have shifted over time, especially in the wake of prominent Supreme Court decisions. More than just a compilation of available data, however, these essays join the popular constitutionalism debate between those who advocate a dominant role for courts in constitutional adjudication and those who prefer a more pluralized constitutional discourse. Each essay also vividly details the gap between the public and the Supreme Court on these hotly contested issues and analyzes how and why this divergence of opinion has grown or shrunk over the last fifty years. Ultimately, Public Opinion and Constitutional Controversy sheds light on a major yet understudied part of American politics, providing an incisive look at the crucial part played by the voice of the people on the issues that have become an indelible part of the modern-day political landscape.