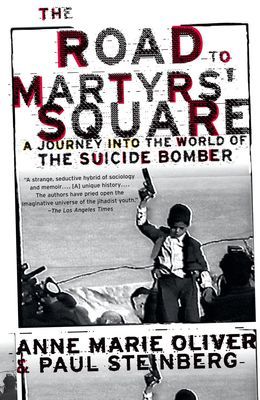 The Road to Martyrs Square: A Journey into the World of the Suicide Bomber

Dont expect to find here the usual cliches about suicide bombers and what drives them. In this unique study, Anne Marie Oliver and Paul Steinberg render the story of two intertwining, often clashing journeys. The authors lived for six months with a Palestinian refugee family in Gaza at the beginning of the intifada, and offer a gritty, poetic portrait of the time. They also provide an unrivalled documentary of the underground media they collected during the course of six years in the area. Although they could not have surmised as much at the beginning, they soon found themselves led through these media into the world of the suicide bomber. Their early study, notably, anticipated the spread of suicide missions years in advance. Dispensing with the platitudes and dogma that typify discourse on the Israeli-Palestinian conflict, the authors show that the suicide bomber is a complex, contradictory construction, and can be explained neither in terms of cold efficacy nor sheer evil. Theirs is the only book on the subject to illustrate the ecstatic, intoxicating aspects of suicide missions, and provide extensive access to materials that have remained largely unseen in the West despite the fact that they have served as indispensable tools in the construction and propagation of the suicide bomber. The book contains 86 illustrations drawn from the authors archive as well as numerous conversations with leaders and followers of Hamas, including a rare interview with a suicide bomber whose bomb failed to explode on an Israeli bus in Jerusalem. Here is an important and timely work that will challenge the way we think about the intifada, suicide bombers, and the Israeli-Palestinian conflict.