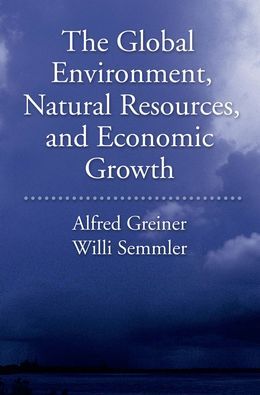 Recently, the public attention has turned toward the intricate interrelation between economic growth and global warming. This book focuses on this nexus but broadens the framework to study the issue. Growth is seen as global growth, which affects the global environment and climate change. Global growth, in particular high economic growth rates, imply a fast depletion of renewable and non-renewable resources. Thus this book deals with the impact of the environment and the effect of the exhaustive use of natural resources on economic growth and welfare of market economies as well as the reverse linkage. It is arranged in three parts: Part I of the book discusses the environment and growth. There, Greiner and Semmler incorporate the role of environmental pollution into modern endogenous growth models and use recently developed dynamic methods and techniques to derive appropriate abatement activities that policymakers can institute. Part II looks at global climate change using these same growth models. Here, too, the authors provide direct and transparent policy implications. More specifically, the authors favour tax measures, such as a carbon tax, over emission trading as instruments of mitigation policies. Part III evaluates the use and overuse of renewable and non-renewable resources in the context of a variety of dynamic models. They, in particular, consider the cases when resources interact as an ecological system and analyze issues of ownership of resources as well as policy measures to avoid the overuse of resources. In addition, not only intertemporal resource allocation but also the eminent issues relating to intertemporal inequities, as well as policy measures to overcome them, are discussed in each part of the book.