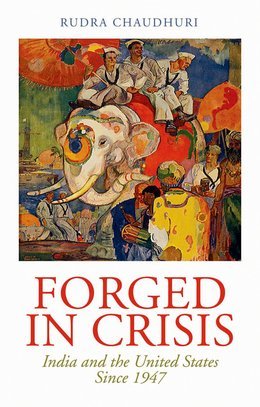 Forged in Crisis: India and the United States Since 1947

Rudra Chaudhuris book examines a series of crises that led to far-reaching changes in Indias approach to the United States, defining the contours of what is arguably the imperative relationship between America and the global South. Forged in Crisis provides a fresh interpretation of Indias advance in foreign affairs under the stewardship of Prime Ministers Jawaharlal Nehru, Indira Gandhi, Atal Bihari Vajpayee, and finally, Manmohan Singh. It reveals the complex and distinctive manner in which India sought to pursue at once material interests and ideas, while meticulously challenging the shakier and largely untested reading of non-alignment palpable in most works on Indian foreign policy and international relations. From the Korean War in 1950 to the considered debate within India on sending troops to Iraq in 2003, and from the loss of territory to China and the subsequent talks on Kashmir with Pakistan in 1962-63 to the signing of a civil nuclear agreement with Washington in 2008, Chaudhuri maps Indian negotiating styles and behaviour and how these shaped and informed decisions vital to its strategic interest, in turn redefining its relationship with the United States.