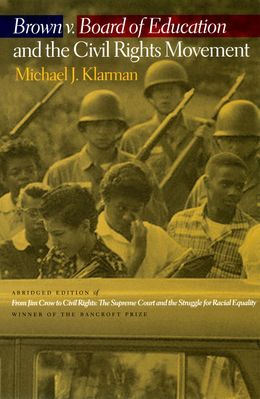 Brown v. Board of Education and the Civil Rights Movement

A splendid account of the Supreme Courts rulings on race in the first half of the twentieth century, From Jim Crow To Civil Rights earned rave reviews and won the Bancroft Prize for History in 2005. Now, in this marvelously abridged, paperback edition, Michael J. Klarman has compressed his acclaimed study into tight focus around one major case--Brown v. Board of Education--making the path-breaking arguments of his original work accessible to a broader audience of general readers and students. In this revised and condensed edition, Klarman illuminates the impact of the momentous Brown v. Board of Education ruling. He offers a richer, more complex understanding of this pivotal decision, going behind the scenes to examine the justices deliberations and reconstruct why they found the case so difficult to decide. He recaps his famous backlash thesis, arguing that Brown was more important for mobilizing southern white opposition to change than for encouraging civil rights protest, and that it was only the resulting violence that transformed northern opinion and led to the landmark legislation of the 1960s. Klarman also sheds light on broader questions such as how judges decide cases; how much they are influenced by legal, political, and personal considerations; the relationship between Supreme Court decisions and social change; and finally, how much Court decisions simply reflect societal values and how much they shape those values. Brown v. Board of Education was one of the most important decisions in the history of the U.S. Supreme Court. Klarmans brilliant analysis of this landmark case illuminates the course of American race relations as it highlights the relationship between law and social reform. Acclaim for From Jim Crow to Civil Rights: A major achievement. It bestows upon its fortunate readers prodigious research, nuanced judgment, and intellectual independence. --Randall Kennedy, The New Republic Magisterial. --The New York Review of Books A sweeping, erudite, and powerfully argued book...unfailingly interesting. --Wilson Quarterly