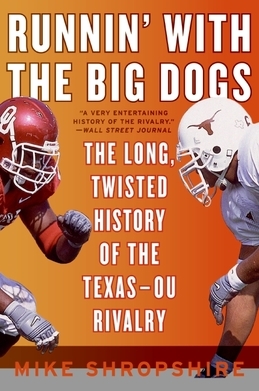 Runnin' with the Big Dogs

The vivid historical rage and modern day bloodlust of one of the most enduring rivalries in all of American sports—the University of Texas Longhorns versus the Oklahoma Sooners.

Runnin’ with the Big Dogs is the ultimate story of one of America’s premiere football matchups, the Longhorns vs. the Sooners, meeting up on the gridiron for their annual pigskin palooza—a deafening, sometimes heartstopping, always memorable event infused with alcohol, animosity, loyalty, and pride.

Mike Shrophsire, an observer of this football war for more than 40 years, chronicles the long and colorful history of this fierce rivalry that has endured for more than a century. He introduces a larger-than-life cast of coaches, players, fans, and politicians on both ends of I–35, and explores the rivalry’s effect on the nation’s popular consciousness.