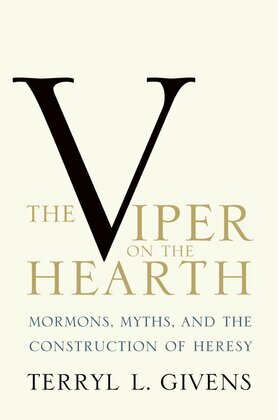 The Viper on the Hearth: Mormons, Myths, and the Construction of Heresy

Published in 1997, Terryl Givenss The Viper on the Hearth was widely praised as a landmark work--indeed, The Wall Street Journal hailed it as one of the five best books on Mormonism. Now, in the wake of a tidal wave of Mormon-inspired artistic, literary, and political activity--ranging from the Broadway hit The Book of Mormon, to the HBO series Big Love, to the political campaign of Mitt Romney--Givens presents an updated edition that addresses the continuing presence and reception of the Mormon image in contemporary culture. The Viper on the Hearth showed how nineteenth- and twentieth-century American writers frequently cast the Mormon as a stock villain in such fictional genres as mysteries, westerns, and popular romances. If today some authors like Tom Clancy use Mormon as shorthand for clean cut and patriotic, earlier writers more often depicted the Mormons as a violent and perverse people--the viper on the hearth--who sought to violate the domestic sphere of the mainstream. Givens is the first to reveal how popular fiction constructed an image of the Mormon as a religious and social Other. The list of authors includes both American and English writers, from Sir Arthur Conan Doyles first Sherlock Holmes mystery to Zane Greys Riders of the Purple Sage, from Robert Louis Stevensons The Dynamiter to Jack Londons Star Rover. For this edition, Givens has expanded the final chapter, shedding further light on the Mormon presence in contemporary American culture, with insightful discussions of topics ranging from the musical, The Book of Mormon, to the political campaigns of Mitt Romney and Jon Huntsman.