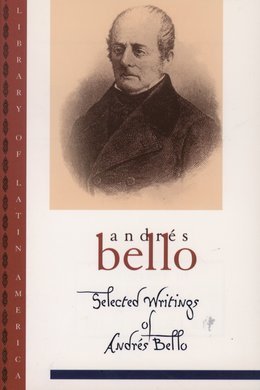 Andres Bello was a towering figure in nineteenth-century Latin America, as influential and as famous there as Thomas Jefferson is in the United States. Poet, politician, educator, essayist, philosopher, he wielded astonishing influence and played a major role in shaping the national identities of newly independent Latin American countries. He held several key government positions, authored Chiles civil code, launched several periodicals, wrote prodigiously on a vast array of subjects, and implemented important educational reforms. Available here in English for the first time, the Selected Writings of Andres Bello, edited by Ivan Jaksic, gathers wide-ranging selections that explore such subjects as grammar and philology, constitutional reform, the aims of education, international relations, historiography, Latin and Roman Law, government and society, and many others. The Selected Writings of Andres Bello gives us a generous sampling of a gifted thinker who must be included in any understanding of the origins and development of Latin America.