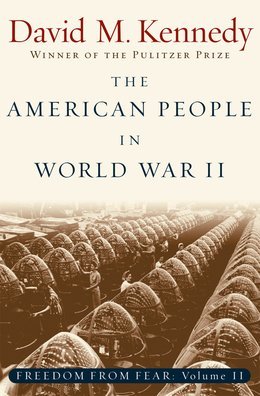 Even as the New Deal was coping with the Depression, a new menace was developing abroad. Exploiting Germanys own economic burdens, Hitler reached out to the disaffected, turning their aimless discontent into loyal support for his Nazi Party. In Asia, Japan harbored imperial ambitions of its own. The same generation of Americans who battled the Depression eventually had to shoulder arms in another conflict that wreaked worldwide destruction, ushered in the nuclear age, and forever changed their way of life and their countrys relationship to the rest of the world. The American People in World War II--the second installment of Kennedys Pulitzer Prize-winning Freedom from Fear--explains how the nation agonized over its role in the conflict, how it fought the war, why the United States emerged victorious, and why the consequences of victory were sometimes sweet, sometimes ironic. In a compelling narrative, Kennedy analyzes the determinants of American strategy, the painful choices faced by commanders and statesmen, and the agonies inflicted on the millions of ordinary Americans who were compelled to swallow their fears and face battle as best they could. The American People in World War II is a gripping narrative and an invaluable analysis of the trials and victories through which modern America was formed.