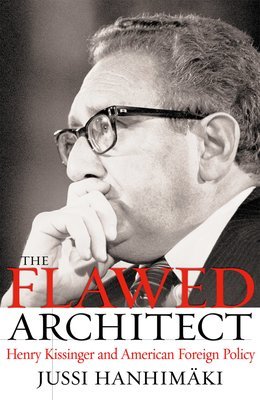 Henry Kissinger dominated American foreign relations like no other figure in recent history. He negotiated an end to American involvement in the Vietnam War, opened relations with Communist China, and orchestrated detente with the Soviet Union. Yet he is also the man behind the secret bombing of Cambodia and policies leading to the overthrow of Chile's President Salvador Allende. Which is more accurate, the picture of Kissinger the skilled diplomat or Kissinger the war criminal?
In The Flawed Architect, the first major reassessment of Kissinger in over a decade, historian Jussi Hanhimaki paints a subtle, carefully composed portrait of America's most famous and infamous statesman. Drawing on extensive research from newly declassified files, the author follows Kissinger from his beginnings in the Nixon administration up to the current controversy fed by Christopher Hitchens over whether Kissinger is a war criminal. Hanhimaki guides the reader through White House power struggles and debates behind the Cambodia and Laos invasions, the search for a strategy in Vietnam, the breakthrough with China, and the unfolding of Soviet-American detente. Here, too, are many other international crises of the period--the Indo-Pakistani War, the Yom Kippur War, the Angolan civil war--all set against the backdrop of Watergate. Along the way, Hanhimaki sheds light on Kissinger's personal flaws--he was obsessed with secrecy and bureaucratic infighting in an administration that self-destructed in its abuse of power--as well as his great strengths as a diplomat. We see Kissinger negotiating, threatening and joking with virtually all of the key foreign leaders of the 1970s, from Mao to Brezhnev and Anwar Sadat to Golda Meir.
This well researched account brings to life the complex nature of American foreign policymaking during the Kissinger years. It will be the standard work on Kissinger for years to come.