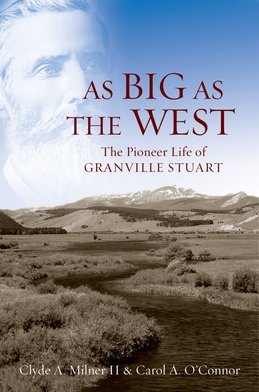 As Big as the West: The Pioneer Life of Granville Stuart

Granville Stuart (1834-1918) is a quintessential Western figure, a man whose adventures rival those of Wyatt Earp, Buffalo Bill, or Sitting Bull, and who embodied many of the contradictions of Americas westward expansion. Stuart collected guns, herded cattle, mined for gold, and killed men he thought outlaws. But he also taught himself Shoshone, French, and Spanish, denounced formal religion, married a Shoshone woman, and eventually became a United States diplomat. In this fascinating biography, Clyde A. Milner II and Carol A. OConnor, co-editors of the acclaimed Oxford History of the American West, trace Stuarts remarkable trajectory from his birth in Virginia, through his formative years in the agricultural settlements of Iowa and the mining camps of Gold Rush California, to his rough-and-tumble life in Montana and his rise to prominence as a public figure. Along the way, we see Granville and his brother James battling bandits and horsethieves and becoming leaders of the new Montana territory. The authors explore Granvilles life as a cattleman, including his role as the leader of a vigilante force, known as Stuarts Stranglers, responsible for several hangings in 1884, his abandonment of his half-Shoshone children after his second marriage, his government service in offices ranging from the head of the Butte Public Library to U.S. Minister to Paraguay and Uruguay, and his final years, during which he composed a memoir, Forty Years on the Frontier, still widely read for its dramatic account of the era. Written with narrative flair and a lively awareness of current issues in Western history, As Big as the West fully illuminates the conflicting realities of the frontier, where a man could speak of wiping out half-breeds while fathering 11 mixed-race children, and go from vigilante to diplomat in the space of a few years.